The long awaited Spring Concert 2 took place last night.
Middle, with his new haircut (buzzed on one side and in back, long everywhere else), and his pressed black shirt, and his congested nose, played sax with the Symphonic Band.
We attempted, on the way to school, the use of sports-like encouragement:
Play the HELL out of it, Middle!
Take no prisoners!
Get in there and kick some sax ass!
But, somehow, these cheers of support fell on deaf ears. It could have been the iPod.

The players are always due at school half and hour before showtime.
And there's no way one could return home and lounge around - so that leaves time to chat with friends in the lobby and peruse the bulletin board. For bulletins.
And check out some outfits...

I'm not going to say anything about it. She's fully dressed, and on a warm evening, in my town, that's a plus.

K was thinking of signing up for this - 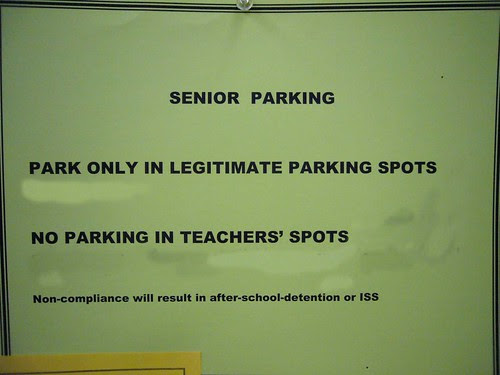 Yeah, seniors, keep your stinking BMW's out of the spots for the Range Rovers. SHEESH. 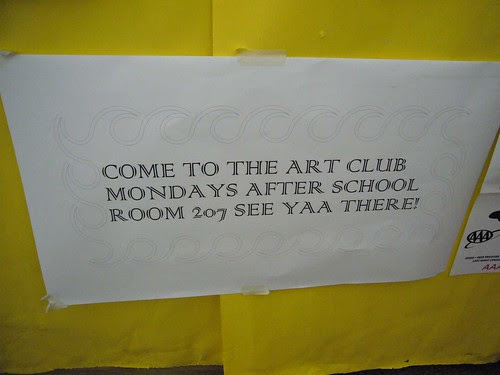 Of course we had to sit through the freshman orchestra, the string orchestra and the chorus before it was time for the Symphonic Band.

The music director was all too thrilled to show off the trophies. Our school won everything. Even our accompanist won the highest award, and the Symphonic Band won with the highest score of any group. They were classified as Superior and Middle says there is a sheet of paper over the band room door that reads Superior.
All the parents were beaming.

As usual, the other conductors were very dramatic (tuxedos, large sweeping movements), and one of the lady conductors was pregnant which was cheery to see, but which provided a conductor wardrobe condition that I feel obligated to point out. 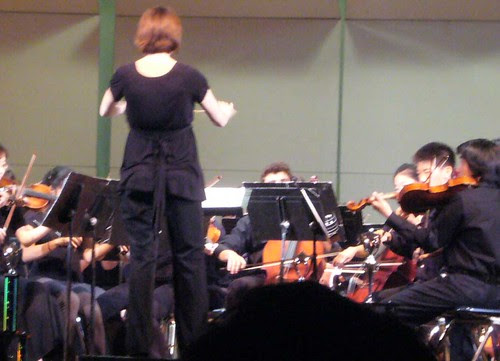 The dreaded shelfbutt.
I know about this condition and worked hard to prevent it during pregnancy.
It has happened to me occasionally in my normal state as well and I can only say that it is truly humiliating as its victims often don't realize that it has befallen them.
Her pants kept falling down too...poor thing. She's actually quite adorable looking and I am cruel to pick on her.
I do this as a public service.
And to remind myself that I CAN NEVER CONDUCT. My lack of talent notwithstanding, no one deserves to have to look at my ass jiggling through classical music.

Finally it was time for Middle's group.
All two hundred of them.
He never sits where I can see him, though I usually catch him ambling in, in his way, chatting with a friend.
He sat in the back.
K taped the four songs - I had a feeling it would be stirring.
And it was.
They opened with a march: E Pluribus Unum.
The conductor stood, barely moving. The tiniest motions.
They were well rehearsed.
And then, the two pieces that won them the competition last weekend:
Spirit Of The Falcon and Lux Aeterna.
The first was sort of march-y as well, and Lux Aeterna was a vast showpiece of music, obviously chosen to highlight the range of the players. Dramatic and quiet by turns it was sometimes operatic and sometimes simple. Of course, being musically illiterate, these terms are coming directly out of my ass - but they were amazing.
After heady applause, and as is his habit, the conductor had them do an encore.
Another march - The Little Champ.
Very staccato, very clipped and well done.
I cannot fully express my delight at having Middle up there as one of them.
It almost completely overshadows the fact that he hasn't done any English homework in three months.
Almost.


Labels: I'm a sucker for boys in the band tonight we hear Youngest's band

Anonymous said…
This must have been really nice, and thank you for the detailed tour, it was cool.
10:05 AM

Anonymous said…
I was a "girl in the band". Before I met "Football Player" husband in Junior year ALL my previous boyfriends were "boys in the band". They were a brooding bunch for sure.
7:49 PM

robiewankenobie said…
i had middle's hair for my first two years of college. and i'd streak the occasional stripe in mad bright colors.

i only dated college boys. until college, when narrowed the field to college boys that sang tenor.
9:42 PM