We've had K's famous 10 hour pulled pork - delectable!
I had my gin and tonics - refreshing!
And both boys marched in the local parade - a first...

A Young pirate. On a swing. At his grandmother's for a barbecue.
He played with his little cousin the whole entire day and delighted all of us.

A new beer. De-lish.
Discovered during an extended conversation with our friend W who brought a couple of mixed six packs for us to taste.
I had, earlier in the week, expressed my dissatisfaction with our present beer and W had some fabulous suggestions to replace it. 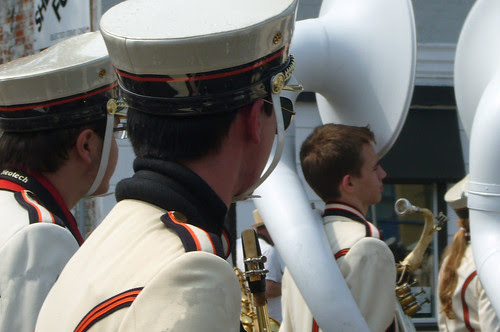 Middle played well in the blazing heat and his wool uniform.
And his Dinkles still fit - which was lucky.

The Masked Middle School Marchers.
Youngest played well and was nice enough to wave to me.
I was heartened to see that he was not the shortest member of the band. Close though.

It's laundry and ironing for me today.
I've had a little too much long weekend.

Saoirse said…
Ugh! I know about the cruel and confrontational thing when they're not doing well. Having raised two stepkids (now 27 and 29) and with my son (19), this was one of those weekends for me. Let's just say it ended up with me picking him up at 3 a.m. this morning. All's well now. Great kid, but oy vey!!! This, too, shall pass...
7:54 AM

Saoirse said…
oh, and I'm DEFINITELY trying the blue moon. If for nothing else (not a big beer drinker), then I have a serious case of label lust for that one!
7:56 AM

blackbird said…
oh, saoirse, if only you knew how much better I feel knowing we are not the only people with a kid like this.
8:00 AM

tut-tut said…
But what a delightful backyard you were able to take respite in, Bluemoon in hand.

What is that disclaimer down below all about?
8:05 AM

robiewankenobie said…
i love that beer. all of the belgian whites are tasty...
8:47 AM

Badger said…
My DH would like that beer. I'll search it out for him.

jenny said…
Cruel and confrontational. Hm. I had a large helping of that from my son this weekend too.

I'm with saorise...the Blue Moon has hooked me with the label. And oranges? With beer? I'm off to the liquor store. Well, later I will be.
10:24 AM

Saoirse said…
BB:
Every situation is different, but, I think with my kid, it's that he often feels "safest" letting it out on me, becuase, in our case, I've been "the rock" (not to be confused with the pro-wrestler, turned actor guy) throughout his life. Anyone that knows him, knows him only as a very friendly, upbeat, charming kid. Which he is 99.9% of the time. I've got to think, though, that with his Dad completely out of the picture (various addictions and disabilities involved), although he SAYS it doesn't bother him, it HAS to. And, sometimes, albeit rerely, it comes all expressed towards ME sparked by something totally inane and trivial, yet resulting in an apocolyptic explosion the likes of which you can't (or maybe can) imagine. (Or, who knows, maybe I really am a know-it-all, always have to be right, pain in the a**?? Nah, impossible!!)
10:39 AM

MsCellania said…
bb, sorry you are being the verbal whipping post right now. My sister gets this All The Time from her youngest, now 20. I witnessed it, accidently, a few months' back. I was shocked. And quite honestly? Didn't know what to say to either of them. I'm sad for both of them.
When you've described Oldest a bit in the past, I've thought "Gosh, that sounds like my niece!" Sadly, they are really a lot alike. She has not found a place in this world, and is desperately unhappy. And is always a 'victim', somehow.
So, no words of advice, just big soft hugs for both of your sadness.
10:56 AM

Anonymous said…
I'm afraid I don't have much experience with kids having 'apocalyptic' explosions of anger. Or, like many 'empy-nesters' (yippee), I have conveniently forgotten the sturm and drang of raising a teenager who's gone (metaphorically) off the deep end and is taking it out on me.
My daughter was an amiable child, not unintelligent, but one of those easy kids to get along with. Even as she grew up, she was happy. I wondered if she had really been happy, and she told me, "yes, I was; I loved my life" and I could tell she wasn't lying to make me feel good about my mothering skills, such as they were or weren't.
Her son, her little Eldest,L, he's already showing a stubborn side, an angry side. Lord, he's beautiful, a really Nordic looking child (taking after my mother who was Swedish)but he's got issues, says Daughter.
I'm not so sure about that, but what do I know. About raising boys. She asks. I wince.
She says he was born angry; I think he was born complicated. And sensitive, too sensitive for his own good.
When he gets just a bit older, I suspect he will be the one who goes after Daughter with verbal attacks, the likes of which some of you are describing.
I'm sorry you had these confrontations, I truly am.
Long weekends are not something I look forward to, since they usually result in something like what you describe, between someone and someone.
Too much time, too much togetherness.

Hope you who need it can find some solitude and tranquility today.
11:21 AM

Anonymous said…
This is driving me nuts:
WHAT disclaimer and WHERE?

maybe I had too much long weekend after all, because I can't find it.

blackbird said…
The creative commons rights stuff under the site meter square.
11:31 AM

Paula said…
Ah bb, I've got my arm around you, babe.

As Saoirse says, I think mine is that way with me because he knows I won't turn away and he is safe with me (even though I'd like to scream).

Hey, if you like that beer, you should come here! All we have is micro-brewery stuff in the store and bars. I even have some Bluemoon in my fridge, although I myself am working my way through the different lambics. We have a Brewgrass Festival every year here in town. Fun for the whole gang!
11:59 AM

BabelBabe said…
I am hugging you, altho I know you don't permit that : )

I am thrilled the damn weekend is over here, except next weekend is going to be dreadful as well.

I am glad you got to relax a bit and watch the two musicians. I think i picked out Youngest by his hair....is that possible?
12:12 PM

Anonymous said…
My oldest is much younger than yours but seems to be shaping up the same with me. I do get a bit tired of people telling me it's because he feels safe to do that with me. That's all well and good, but it's still pretty hard to deal with.
2:23 PM

Anonymous said…
I am scared just reading this.
But all my good vibes are for you. And Middle and Youngest who look fantastic, as usual.
Would love to try that beer...
3:00 PM

Anonymous said…
My son used to have the most appalling tantrums which were very scary for everyone. Then one day he discovered that he could get us to do what he wanted by making us laugh. It has proved to be a very successful strategy which he recommends to other teenagers. It does not stop him from the usual teenage disasters and we have now nominated May 22 as 'Bad Parenting' day when my husband and I remember the various failures of discipline and numb the pain with alcohol.
The interesting thing is that his father also had a problem with tantrums as a child. I think that with intelligent children they can sometimes be unable to reconcile the difference between what they aspire to and what they are able to achieve and the only way they can express the frustration is physically - sometimes against themselves and sometimes against the people they love the most.
Hang on in there bb
Alice
4:52 PM

I have no advice to offer with child as mine is 12 weeks old and his tantrums consists of the cutest cry.

Anonymous said…
It appears that you, me and Saoirse have something in common. When my son (age 23) is going through a difficult time his problems become my problems and I am instantly exhausted by the roller coaster ride that follows. Reading the comments from Saoirse kind of turned the light bulb on in my head. Keep your chin up BB. Hey, am I the one that reads you two or more times a day?! I'm not a stalker, I swear. Oh yeah, my son likes Blue Moon too, with an orange.
6:41 PM

blackbird said…
Kel -
I'm guessing that means I have at least a year of tantrums ahead of me?
7:01 PM

blackbird said…
oh, and Kel,
you aren't my stalker -
my stalker is an insane yoga teacher who lives here in my town and has a messed up life and has decided to lash out at anyone who doesn't ...
fear not.
7:02 PM

Suse said…
Oh my that Middle is looking so tall and handsome these days! And I picked out Youngest too - small and beautiful.

MizMell said…
Sounds like a full weekend.
Bet you're tired and ready for some down time. Love the photos.
7:38 AM