The sun has barely shone for DAYS. DAYS I TELL YOU.
There was the merest hint of warmth yesterday afternoon and yet knowing Tuvalu and its weather patterns we know not to put away the sweatshirts.

Many plans stretch before us for the upcoming warmer weather:
we are invited to a super sweet sixteen party, as a family
we will attend my nephew's first communion
K and I will go to a weekend wedding in the mountains
I am going to blogher,
and we will travel to Wellfleet.

The order of the day is yard work - and there's plenty to be done. I, for one, am looking forward to raking the gravel from our driveway out of what used to be the front lawn. 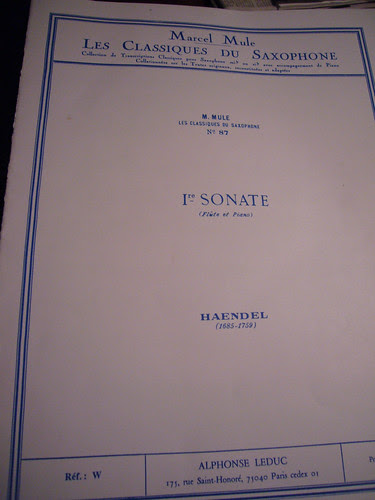 Registration at the festival went without a hitch - which is unusual.
We marched off to the large practice area, and Middle did a few run-throughs. 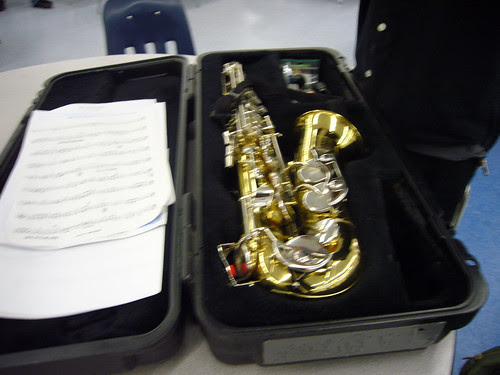 Suddenly, across the large room and though a window to the hall I saw an old friend and ran to meet her.
WHAT ARE THE ODDS? It was my gynecologist.
We had a nice quick chat (she loves me and I think she's fabulous - she calls Youngest HER baby) and then we each rushed off to support our children...

I ran back to Middle and, strangely, right after I told him who she was, HE FORBADE ME FROM SPEAKING FURTHER ON THE TOPIC. Imagine?

Practice accomplished, reed ready, we took the long walk to WW2, which is woodwinds 2, not World War 2 as I was told with a roll of the eyes. (I couldn't help it, I was nervous and he was SO composed, and obviously I couldn't shut UP.) 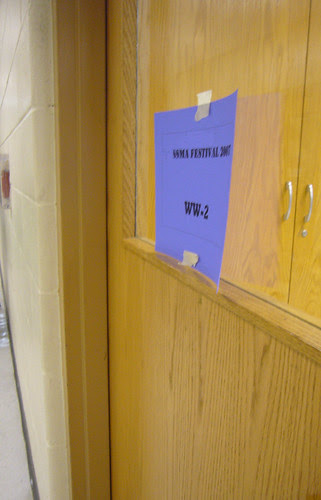 I hate waiting in that hallway. Everyone is all abuzz and there are kids who are jumpy and chatty and parents who are throwing their weight around.
I was sitting on the sax case and a lady whose ass was eating her pants stood very close to my face and screamed: ALEXIS! ALEXIS! CALL AND HAVE THE CAR PICK US UP IN HALF AN HOUR. I wanted to trip her.

So there I sat. Middle was called in and I was FREAKING OUT. I'm very sad that I won't get to hear that piece again (why do I have to make everything sad and final?)
and I was so apprehensive.
I could hear him from the hall - and I stood up once to nod to him through the glass in the door.
Then I sat back down. And strained to hear.
He was playing beautifully - AND THEN HE STOPPED COLD.
He started the next movement, it sounded great, AND THEN HE STOPPED.
I started to cry.
Surely he must have messed up horribly and I, with no ear for music, missed it.
I was torn up inside - stopping twice during a four movement sonata would mean a very low score.
I was wringing my hands with worry. All that work. All those months.

I ran down the hall so I wouldn't be able to hear anymore.
I saw a mom I knew and we chatted for a bit but I was so distracted.
I kept thinking of how he'd feel, how awful it must be to make a mistake alone in a room with a judge listening so hard.
When I turned around he was in the hallway putting his sax away.
He was smiling hard.
I bent down to talk to him with big tears in my eyes.
What happened? I asked.
Well, I nailed the scales, he was grinning a little.
But the piece - I heard you stop, TWICE. I started to lose it.
Yeah, she stopped me midway through each movement, said I did well and she didn't have enough time.
She said you did well??!!
Yeah, she thanked me and said I did great and told me at the beginning that she would stop me when she had heard enough.

I burst into tears. I told him I thought he had made huge mistakes and he just laughed the tiny quiet laugh that he has.
I was a wreck.
He offered me his ass rag (a bandanna he usually wears hanging out of his back pocket which had been tucked in, as was his black dress shirt, out of respect for the judge).
We talked a little more.
We saw an honors music student we know and he asked her about being stopped. She said that the judges often don't let the kids in the upper levels play their entire pieces. And that it was a good sign.

I was still kind of shook up when he put Bohemian Rhapsody on the cd in the car.
We put the volume on 15, lowered the windows and loudly sang out our anxieties.

Labels: thank god that's over with

MsCellania said…
Aw, bb!
You must be completely wrung out. I die 1,000 deaths watching oldest do his taekwondo belt testings. I used to think I was some kind of overemotional weirdo, then I noticed that EVERY parent was in agony. So not so strange at all.

Congratulations to Middle for doing so well. It was particularly touching that he loaned you his ass rag. I think.
9:24 AM

Carol said…
That is so exciting. You are obviously, and for good reason, so proud!

Have a great rest of the weekend now that this is over.

I have yet to start the kids on instruments...after that (and all the memories I have of trying to keep myself in 1st chair)...I don't know how hard I'll push!
9:38 AM

Anonymous said…
So this doesn't get easier as they get older? Damn.
9:38 AM

Anonymous said…
Happy to hear everything turned out for the best. Chapeau to Middle!
I am laughing hard about the lady "whose ass was eating her pants"...don't we see to many of those???
have a relaxing weekend.
Oh, BTW...78°F here, sunny and everybody swimming...if you wanted to know...
10:16 AM

Badger said…
Have I told you how very much I am LOOKING FORWARD TO BAND?

tut-tut said…
yes, it's all so nerve-wracking, isn't it? Lucky for me, parents must not go beyond the perimeter of the cafeteria for a similar event here for stings.

Anonymous said…
Congradulations to Middle. And to you.

Anonymous said…
Oh I remember those days in solo competition....I played flute and it was so nerve-wracking...but it sounds like Middle did great!! Those will be fond memories for him when he gets older.
12:50 AM

Now make sure when he reaches college, he doesn't stop playing.


Grrr - all those lessons, concerts, auditions....and trumpet abandoned for bass and drums!
7:44 PM

Alice said…
So exciting and nerve racking! I would have been freaking out myself! I actually did a bit of freaking out and stomach turning just reading the post... glad all is well.

You didn't wipe your face with that ass rag, I've had boyfriends with ass rags... I've got to warn you: ass rags, not for the face!
10:38 AM