When K was not shackled to a corporate machine (that's a heck of a phrase, eh?) he cooked for us.
He went to jobs about two thirds of the year and wasn't around during those times, but he had about a third of the year as down time - and it wasn't a bad thing.

Not only is he an amazing by-the-cookbook cook, but he improvises pretty well too.
Just about the time that he drank the Kool-Aid he was working on french bread, now that he's spit it out (the Kool-Aid), I suspect he'll be giving my bread making a run for the money (I'm just wondering, do you think I have enough metaphors going yet?)

He's been getting back into the kitchen these past couple of weeks and can be seen browsing through our cookbooks for inspiration - any day now I know he'll mention a recipe he wants to try and we'll figure out who to have over. We've done much less of that of late, and we love to cook for people...

He's also, as I think I've mentioned, been back and forth to the library for movies.
A few days ago he brought home the complete series of Chef!.
Do you know it?
It was a short lived BBC show - only seven episodes, I think, and it is just terrifically funny.
We've snuggled into our newly re-positioned living room and watched with the boys.
Actually, we set up the dvd, realized we needed to move every piece of furniture in the room and did it before we started watching. 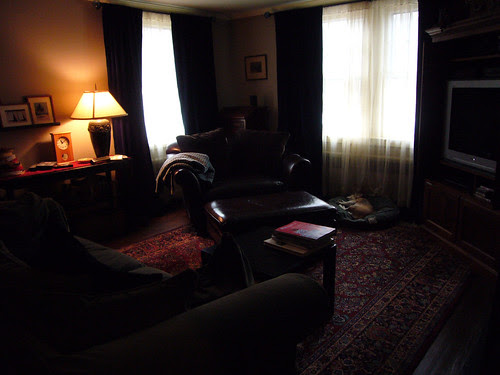 Now everyone can see the television AND the fireplace.

Anyway -
back to Chef!, no one screams at the help the way Chef does -

Gareth: So please go away... and please re-arrange the contents of this plate so that someone in the latest stages of malnutrition will at least take a passing interest in it.

Gareth: Everton, let me explain things to you. In the world of cooking, I am Einstein. Lucinda is Isaac Newton. And you are a mud-dwelling unicellular bit of jelly with a predilection for consuming its own excrement.

Everton Stonehead: You don't like the way I cook?

Gareth: I feel it's important to be frank.

[while preparing vegetables] Gareth: Somebody bring me a knife, very long and razor sharp. I need to castrate the person who made this sauce and I don't want to cause any unnecessary suffering. I'm not a vindictive man, I'm not out to cause pain, but with this man's DNA in the gene pool, humanity is doomed.

This is probably the third or fourth time we've watched them since they were on television in the 80's.
This time we've introduced Youngest to them and it's been wonderful fun to see him laugh so hard.
And, I would assume, I will soon hear some Chef-isms from my own kitchen.

Anonymous said…
BUT WHERE ARE THE JARS OF BLACK BEANS??
12:31 PM

Badger said…
Okay, well, I just added this to my Amazon wishlist. Because YOU said it was good. But I am not buying a Volvo, dammit! Or a dog, either.
2:18 PM

Anonymous said…
I ADORE Chef!
It's been awhiel since they showed it here, but I've been watchign it every time.
He's simply divinely hilarious.
BTW, what a great living room!
And...isn't it wodnerful to have a husband who enjoys cooking?
Hope he had a good start at work.
Ciao
2:52 PM

Anonymous said…
I LOVE this show! Chef loves it even more... for obvious reasons!
3:45 PM

Anonymous said…
We STILL miss Chef; how long ago was that, anyway?
6:36 PM

Anonymous said…
you're lucky. so lucky.
my husband also has a third of the year as down time. but. he. never. cooks.
6:38 PM

Anonymous said…
It took a while, but I finally found the dog in your living room.
7:18 PM

Anonymous said…
omg, i LOVED chef! and it's on dvd now??! wow :) gotta go check it out on amazon.

DH used to cook for us when he was"laid off" because of his back. The Young One still remembers with fondness how he would be home for her after school and make pizza bagels for her. Once, he even made an apple pie. And he still does laundry.

Elan Morgan said…
I have informed the Palinode that we must get on with watching this show tout de suite. Thank you for the tip.
10:28 AM

Poppy Buxom said…
Oh God. Chef (of which I had, frankly, never heard) has been released on DVD. And now every smartypants British-humor-loving foodie who reads your blog knows it.

Chef sounds amazing, and I'm putting it in my Netflix cue. We'll watch it, and laugh and laugh.

And then, in the future, I will hear all kinds of recycled Chef-isms.

Anonymous said…
My husband loved Chef and force me to watch it with him. But that's okay b/c it was so funny. But surely there were more than 7 episodes?
9:17 PM

Anonymous said…
Series 1-3 of Chef have now been added to my queue. Thanks for the tip, and pictures of what looks like an amazing family room.
5:58 PM