I'm not really caught up in the yuletide, as yet

Maybe it's the lack of Christmas tree, I don't know, but I'm just not feeling it.
And some years I never get it.
This weekend is the hanging of the greens at church - that may help.

Last night we went to Youngest's winter concert, or holiday concert - I don't know what it was called, though I DO know that it wasn't a 'Christmas Concert.' That's not allowed anymore.

As Youngest had to be dropped off early and parking at the school is non-existent, most people park somewhere nearby and sit in the auditorium for half an hour.
We sat with my walking buddy and caught up.
And I played with our camera - 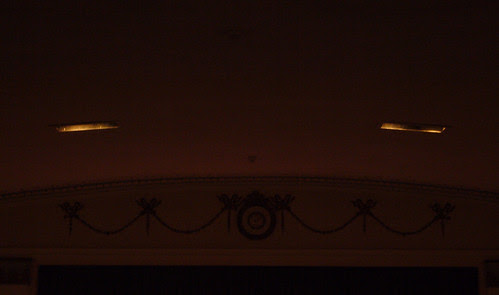 I really like the auditorium at this school -
it has blue drapes and ornate trim around the room. 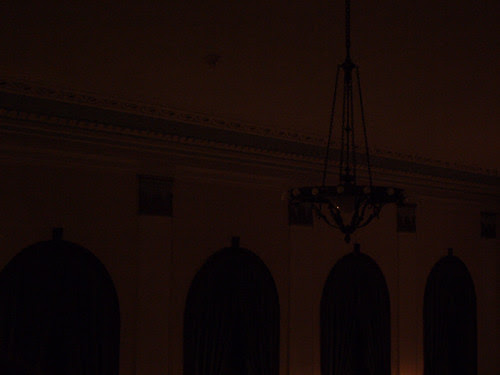 The chandeliers are pretty nifty too. 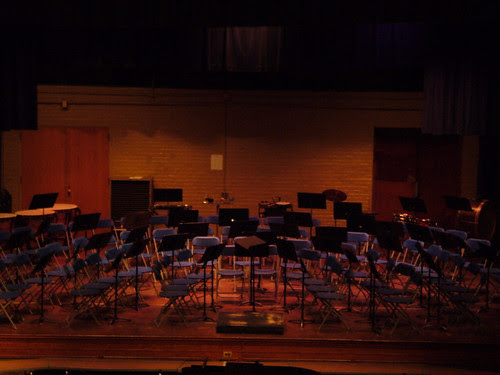 The size of the school astounds me sometimes.
This concert was for the 7th grade A Day and B Day bands, the 7th grade orchestra, and the 7th grade chorus. There are other concerts for the 6th grades and their band, orchestra and chorus as well as the groups for the 8th graders.
Hundreds of kids, hundreds and hundreds of parents and grandparents.
Roughly three thousand cameras.

The orchestra was first - 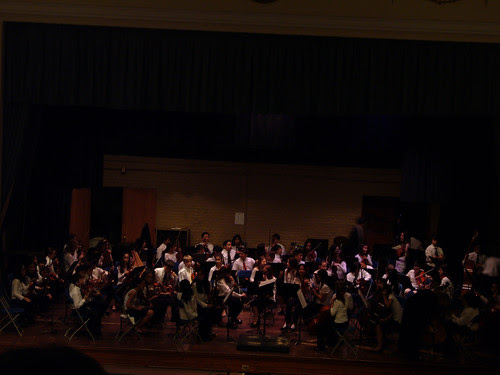 They were good.
More in tune than I remembered.
They did three pieces and I had fun looking for the children of friends and some of Youngest's pals. 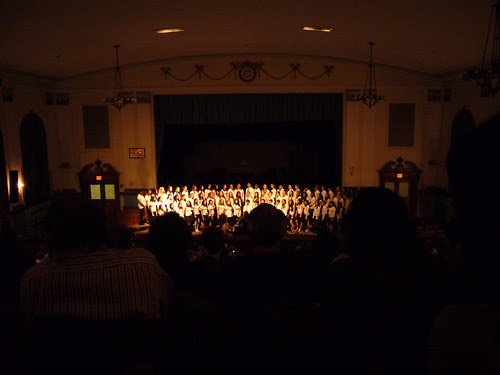 the young voices of Tuvalu lifted our spirits with three selections which THEY ACTUALLY SANG rather than mumbled or whispered through as has occurred in the past.
They were fun and cheery -
ALTHOUGH...
I did notice some girls in the front in VERY VERY short skirts and spaghetti strapped tops and high heels, and I must admit, I became concerned for Youngest who is a cutie patootie and is LIGHT YEARS behind these, um, women. They could make very quick time of him with their come hither looks. QUICK TIME I TELL YOU.

okay
so
Finally the band took the stage.
With My Baby Who Is Not Ready For Girls In High Heels. 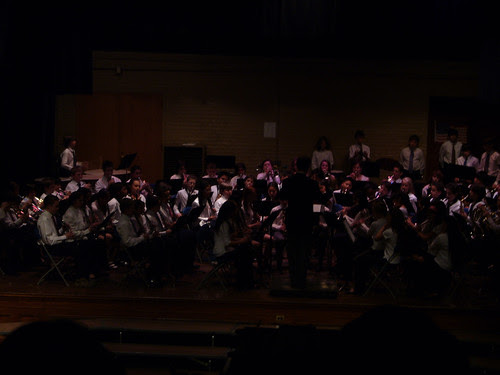 Of course they were the best.
They played two pieces and an encore.
(I can't believe we rehearsed an encore, Youngest complained, aren't encores supposed to be spontaneous?)
We especially liked the final selection, which I have re-titled The Antonio Banderas Song even though Middle thinks it is from The Three Amigos, a movie we all know and love. 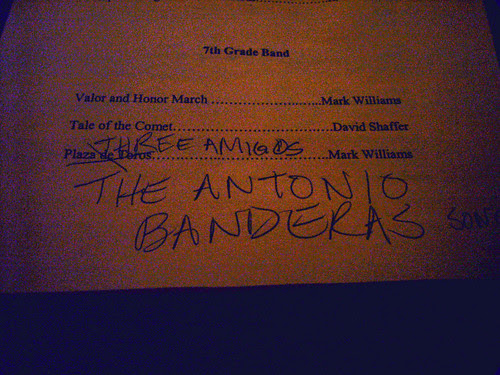 Middle performs next week.
We'll do the tree this weekend, and the cards have been mailed.
I need to bake -
and be swept up by the spirit.
Maybe saturday.

Anonymous said…
I use to cry when Chris would sing his solo at the winter concert.

Sharon said…
I'm 42, and it's still not Christmas for me each year until I play in a Christmas Concert. Yes, still a band geek at this age.
7:31 AM

Anonymous said…
I'm waitinf for the spirit, too. Not grouchy or grinchy, just not feeling it. Think partly due to Easter-like weather here.

I have cleared Saturday for the gingerbread cookies. Sister #5 is making the Italian cookies. Hoping sisters #2 and 4 will join in and they we will all swap.

--erica said…
We're doing singing and such all week.. the choir with a symphony.

I'm not feeling the "christmas" yet either. Is that really scheduled for Saturday? ;)
5:17 PM

Elizabeth said…
I tried the baking and it didn't work. Still haven't got it. Posted it, though.
The girls and Youngest. I thought the same thing with my Lad, although at his school no spaghetti straps allowed. They are even powerful without them!
At least you did cards. Ho Ho Ho... (weakly)
8:45 PM

BabelBabe said…
try a bout of stomach flu. or not. ergh.

but primo's xmas concert is next tuesday, and we'll get a tree this weekend.....if we can all stay upright. i will send you a christmas card - that will help : )
9:51 PM

Tongue in Cheek Antiques said…
To think your children play music and you bake cookies!
Christmas is a wonderland chez toi!

The devil wears Prada is a good fashion show.
7:42 PM