my big project, photos, some words 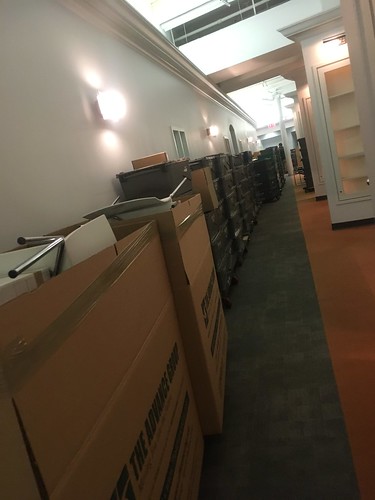 The staff (136 people) packed their things.
The movers packed everything else.
We closed the office at 3:00. 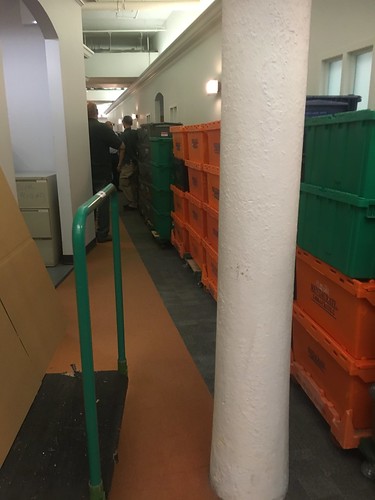 The movers had two trucks loaded in the first two hours.
At 5:30 they began loading the third truck.
My moving partner, C (IT Director) and I sat and worked with a last look at this
view. 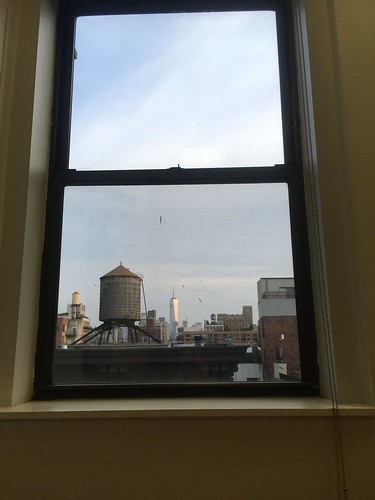 We ate frozen food left by the employees and, at 10:19, got the word that the tree (last thing on) was loaded and truck 11 was leaving.
We grabbed our bags and headed downtown.
We had rooms in the Hilton next door.
We were told to prepare for very long days - and we were prepared. 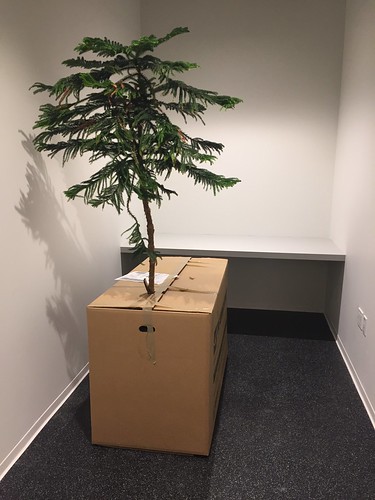 Historic to the company (65 years old), the tree arrived first and was tucked safely away.
By the time C and I arrived downtown 760 crates had arrived and N, our project manager had put them, in threes, in each numbered location. So, things looked pretty good. Everything in its place - our job: make it habitable. 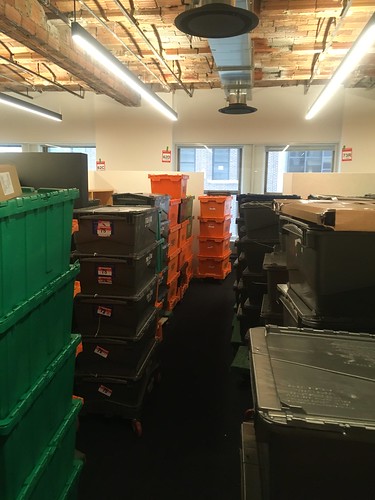 C set up shop at his workstation. I grabbed a crossbody bag for supplies and started walking the loop. There was no air conditioning.
I put branded pencils at the desks. Then laptop covers.
Over the course of four nights and three very full days I answered contractor questions, painter's questions, dealt with countless issues around furniture and walls and ceilings and water and electricity.
I don't understand IT so I can't list all C did but he was on site longer than I was each day/night save for Saturday when I texted at 10:30 that I had gone to the hotel. He texted back that he had a problem and was bringing equipment from the old office (the final IT move was scheduled for three days later). He needed a way to get the stuff into the new office - would I sweet talk the security guy? I did. It would have been free but I gave him a $20. That night ended at two or three in the morning with really bad chinese food.

We watched a thousand pound desk be set in place. 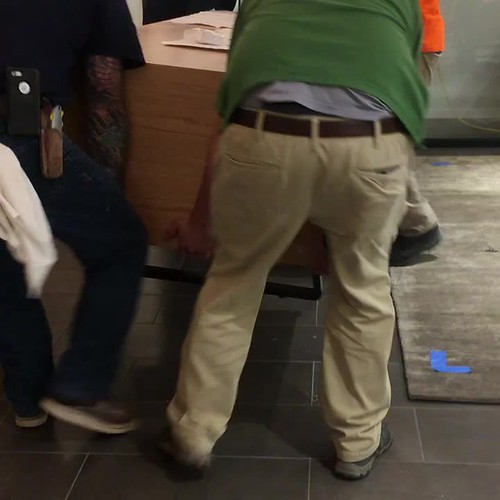 And, while checking wiring, realized how comfortable the floor was. 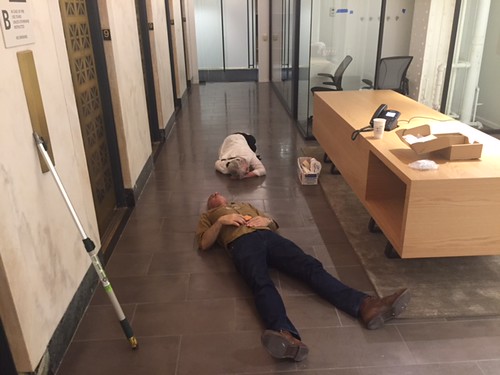 I put my hand on wet paint while the painter stood in front of me. 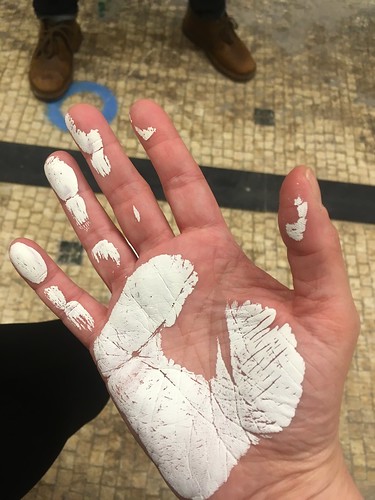 It was hours before I had a chance to wash it off. 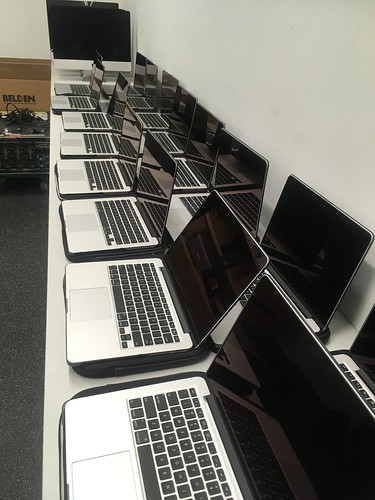 We discovered treasures in the ceiling. 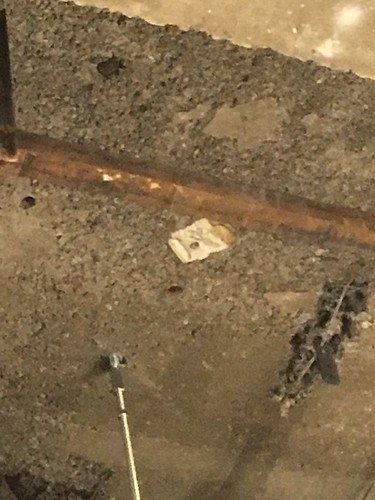 I sat when I could. 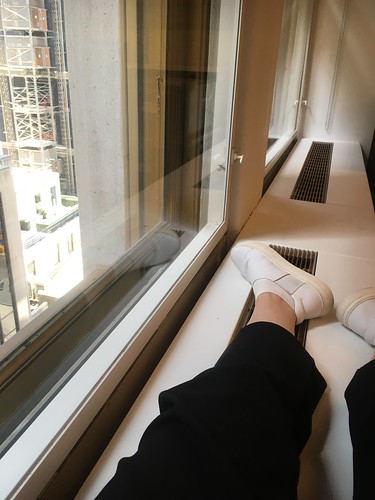 We drank when we could. 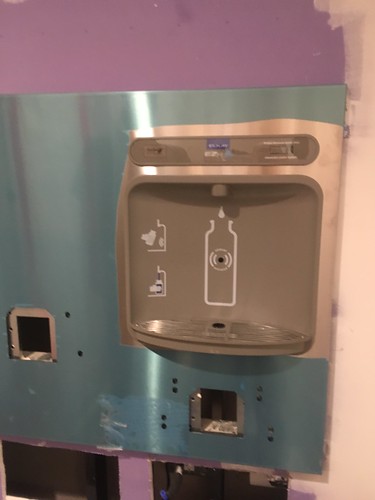 There were no arguments.
No harsh words.
No crying.
No time to think of anything else.

And now we are there.
My pedometer shows that I've walked five to six miles a day since last Thursday and I've never left the building. 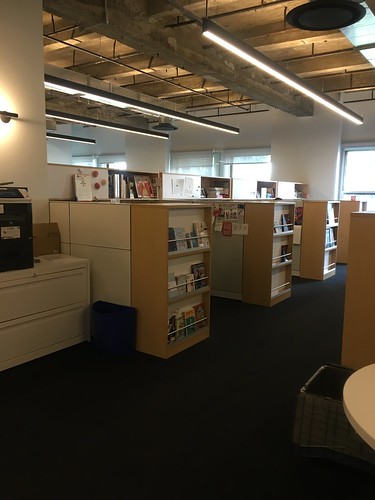 I'm home for the first time in many days.

We'll go to the beach.

Anonymous said…
Wow. That's a HUGE endeavor--moving an entire business. I cannot fathom the logistics, how organized you must be and how much you have to move. Enjoy the beach.
3:38 PM

Jeanne P said…
What an amazing accomplishment! What would they have done without you?
Enjoy your Fourth of July and have a great summer.

kmkat said…
I have been enjoying your big proj, er, BIG PROJECT! on Instagram. It was actually a HUGE PROJECT (YUGE?) I am glad you are able to relax a bit now.
3:46 PM

And now they're there. You too. Enjoy your break.

Smartypaintpro said…
Like all your posts. What an exhausting project!!
5:14 AM

caithnesshabetz said…
This comment has been removed by a blog administrator.
4:14 PM