Did I mention that there are masons working outside my window at work?
All day.
All. Day. (Actually, they quit at 4:00.)
Banging, drilling, chipping, clinking, with debris raining down on my windowsills.
Yesterday they sang Spanish songs. They must have been pretty happy - it was 45 degrees.
Yes, yes, I'll try to not talk about the weather.

My boss is away until April and, while I'm taking off days here and there, I'm also using the time to clean up. I've got at least two drawers of stuff to shred and I need to streamline his space while he's out.

I also have an opportunity to focus on some of the work that is just mine. That's really all I can say about that, though I am going to London next month and I have done a lot to arrange some things in Italy for a meeting there which I am, sadly, not attending.


Last weekend we trundled off on the train to Hoboken for a St. Patrick's day feast.
It was pretty swell.

I ate about a pound of butter distributed over a potato casserole I loved, some fennel bread to die for and some short bread. I got the recipe but I'm not even going to bake the short bread as I've a feeling I would eat the entire thing as one large cookie.

We left at dusk and walked for a long time along the river to get back to the train. 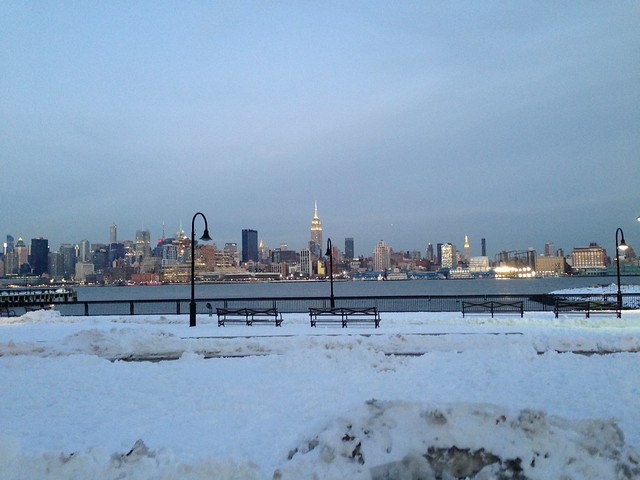 Filthy snow aside, it was beautiful and I had a very sweet time being out with my boyfriend.
It's also nice to have been invited to someone else's home as it's usually us doing the inviting and the cleaning and the cooking.
It was good to be entertained. 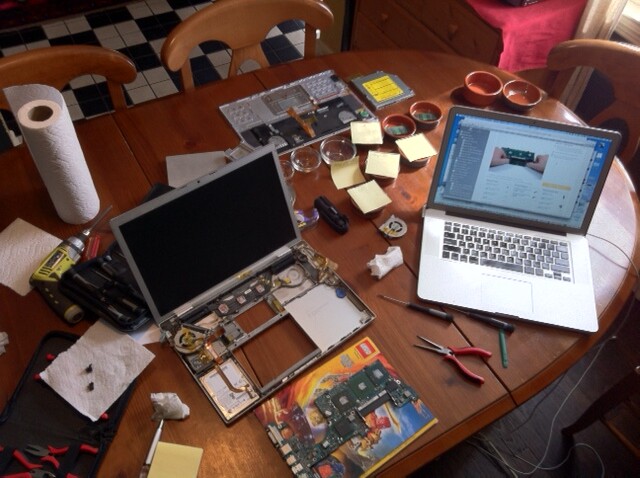 That would be Oldest's ancient hand-me-down laptop in hundreds of pieces. I think I have this right when I say that the graphics card had ceased to function. K did some research and followed instructions to take the whole thing apart (as shown) and bake the motherboard in our oven for a prescribed amount of time and then re-solder something or other.
Anyway,  it worked...which only cements K's rep for being able to fix any goddamn thing in the world.

I bought this. On sale at H&M. I'm pretty sure it will look like that  ^ on me too.
I have no illusions.
A side-effect of age and lying down for a couple of months whilst being fed amazing food during recovery have left me with a jiggle and roll and I am miserable about it.
I've re-started my swift one-mile walk to work each day, have cut back on weekday wine (one glass if I can manage it) and am trying to eat less. I don't eat especially irresponsibly but that morning scone was not helping (after the subway to work instead of the walk).
My point is: I'd like to have things fit when I unpack the summer stuff, okay? I'm not trying to look like a model but the jiggle and the roll must go.

I've graduated to a new phase of recovery: things will never be normal for my left hand.
This is the new normal. 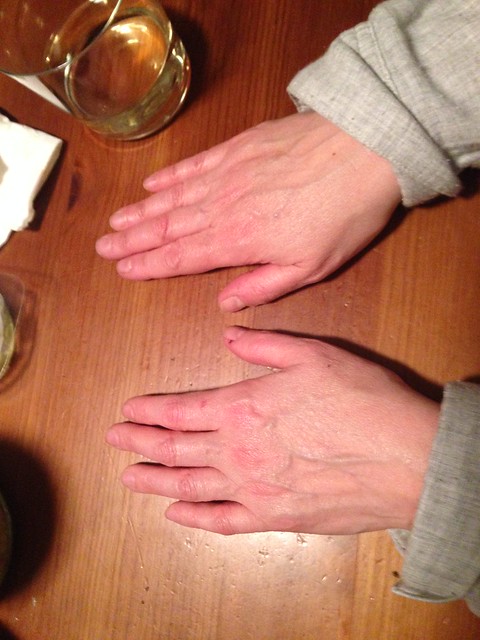 Yep, it's amazing (and hard work) that it functions at all but the hand pulls to the left, the pinkie does not straighten, the finger ligaments all pull toward the left, the palm is numb, my fingernails sometimes hurt, the thumb is problematic.
I'm okay with this.
I shall continue this round of PT but don't expect any vast improvements and look forward to the end of treatment, to leaving the pain management practice, being discharged by the surgeon and thinking of something special to bring to my therapist who has brought me so far.
I'm not boasting/trying to be heroic/or, good god, a martyr, but, come July, I want to stop being the person who was in an accident.

On Fridays, at 4:00, all the way in the back of the building, in a dark but large office in the marketing department recently dubbed Conference Room C (we have real conference rooms named A and B) there is wine club.
One doesn't get invited to wine club, one stumbles upon it whilst coming into marketing at 4:00 on a Friday with a question or spies it when running to mail something before the mail room closes, or hears people laughing and is brave enough to barge in.
It's plastic cups (though the founders have glasses) and any wine donated/found/purchased.
Yesterday it was champagne leftover from a celebration.
4:00 wine club is reason #307 for why I love where I work.
The conversation is brilliant - we talked shit about the intern with the huge ego, and sometimes, by the time you leave (at 5:00) you have forgotten why you were in that hallway at all.

Anonymous said…
You work in an amazing place.
And I hear you on the jiggle & roll. I have my own to contend with and my game plan is similar, sans subway.
It's good to red how you're coming to grips with your new normal grip. Who would ever guess a single incident could alter EVERYTHING, but then yes, there's the after and eventually it won't all seem so different.
Your men are superheroes, aren't they? Just amazing what they do.
10:02 PM

Duyvken said…
Oh yes, I have my own jiggle and roll. I was hoping to be rid of mine by summer but now that autumn is here I have reset my expectations and am aiming for winter. I am an optimist.
You will look gorgeous in that H&M tunic.
I am very impressed by you and your hand recovery.
Your workplace sounds wonderful, BB.
11:18 PM

Paola said…
I was BORN with jiggle and roll. Umph.
You know, maybe it is good to come to terms with the fact the after such a big surgery one can never be the same again. We all must learn to make the absolute BEST of what we have but can't expect the impossible, can we. Take this positively as I know you're surrounded but the best team of people there could ever be. I am not telling you how dad is coping the rehab, it's absolute nonsense.
Question for your wizard boyfriend: my MacBookPro dies suddenly by itself, even @55% charged battery. Is it dead??? I would love for him to bake it and make it shining brand new and functioning!

kmkat said…
I giggled at K taking apart the laptop and baking the motherboard -- sounds exactly like something my husband would do. And I giggled extra hard when I saw that he was using a Lego catalog (magazine?) as a workpad. My husband, never that classy, uses a piece of plain corrugated cardboard over a tv tray table.

Perhaps having a serious accident like yours is a bit like giving birth. There is the trauma, a period of recovery, and eventually life goes on. But you are never exactly the same afterwards. Of course, after giving birth you have a new life to celebrate. In your case, you now have a hand that mostly functions. Not a perfect analogy.
11:43 AM