I'm working hard on these snowballs for my dining room.

Listen, they ARE SNOWBALLS.
Garlands, I think they'll be.
I can do two before I'm crippled and that's about half of them so, today, I need to make some progress.
I saw some very nice yarn-wrapped branches on another blog that I might try as that blogger has two bad hands and I figure if she can manage them then I can.

I saw this amazing looking woman on the train on Thursday. Blue gloves, fascinating scarf (from MOMA, I think) and the most beautiful coat which fit her perfectly. You know you can take photos with your phone by clicking the button on your headphones. Dozens of photos. Without looking through the phone/camera. Of course, if you are like me, you can raise and lower the volume of your music whilst trying to determine which button and when, but you'll figure it out.
Across from her was this guy with the wonderful tam.

I realize he's not easy to see but he wasn't easy to photograph using my headphone cord either.

Last Monday my friend K and I went for a tasting at the restaurant where we've organized the holiday office party. My boss teased: I know, it's a burden, which was so uncharacteristically funny of him that I repeated it for a week.  Of course it was anything but. We had to remind ourselves to eat slowly and to think about the amazing flavors we were experiencing.

Just a small tendril of octopus around a tiny funnel of creamy potato with a dollop of black squid ink cooked to tender perfection.

Barley porridge with something and something.

Tiny fish cakes? No idea. We started with oysters and cava and by the time we got to the wine and the fifth or sixth finger food I lost count of the wonderfulness. It's going to be a spectacular party. 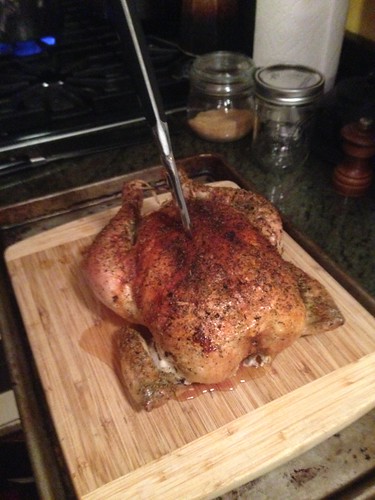 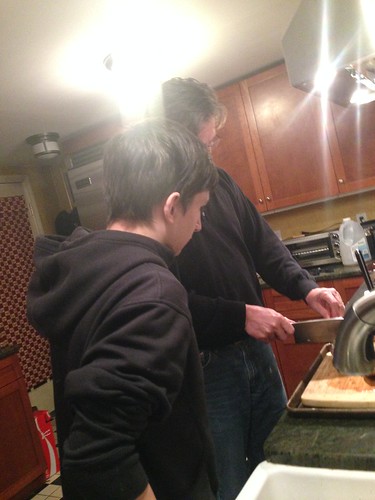 Whilst in the dining room...

Yesterday, after work, Middle did his Christmas shopping. All three boys are quite adorable about their Christmas shopping. They'll text me with photos of what they want to buy each other or K, they'll be so excited about their finds that they'll come get me out of bed to see what they've bought, they'll send links to see what I think about something they have in mind for their dad. They're great gifters, I have to say and it makes me emotional when they get wrapped up in making their brothers happy. SO, Middle went shopping, got great stuff for everyone, went for dinner and drinks with a friend and caught a late train home.
I woke to pouring rain at about 10:00 (Lyrica!) and realized he might have a problem getting a taxi so I texted that I'd pick him up when he got in at 11:00 and then watched a little House Hunters International (I'm not moving to Ecuador). Boots and coat on over my pajamas, I slogged out in the pouring rain to fetch him. It took extra-long for him to get to the car and he told me the conductor had to come and wake him - we are the last stop (always good stories about not waking up and finding oneself on the way back to the city). He started to tell me, as I was driving home, about the things he bought when he realized he'd left the bag on the train.
I haven't driven much but I managed an illegal left turn to return at great speed to the station.
We ran (the train was set to leave) to the platform where the train was closed and locked but we saw the bag on the seat in the third car! Finally, after a lot of back and forth, Middle found a conductor to open the train and retrieved the bag. A triumph after what seemed like forever, Middle sauntered out of the train...that would've been bad, he said after I started to get teary.
You've saved his Christmas, I told the conductor, and we went home so Middle could show off his purchases whilst I downed an Alka Seltzer.

Anonymous said…
Sounds SO merry by you right now between the good eats, snowballs (flakes?) and shopping. I got very little shopping done today and still feel panicked by the IDEA of Christmas.
4:49 PM

NorahS said…
Oh, I was holding my breath! Whew. Love your decorating ideas, as usual.
6:52 AM

Loretta a/k/a Mrs. Pom said…
Ack! Def something my youngest would do!

Duyvken said…
Oh that coat! My sister would adore that.
6:41 PM

Little Miss Sunshine State said…
I always get excited about what will be on your Christmas garlands!

I hope you're getting some relief from the Lyrica. I thought it was pretty good stuff for nerve pain.
9:24 PM

Anonymous said…
What a tale! OMG, I just looooooove your family. I really do. I think I am in love with Middle.