the week behind, the week ahead

I think my work life is destined to be complicated until June.
I'm getting through it but it can be rough.
Outside of work I had a big disappointment last week. Something I had hoped for will not occur and I am sad about it. I cannot say more, but, just before it became apparent that I would not get what I wanted, a man stopped me on the street - busking. He attempted the Star Spangled Banner three times until I gave him a dollar and told him it's too difficult a song.
But I want to sing for you, he said, and he did have a very beautiful voice.
Try something you're more comfortable with, I told him and he did a little hymn.
He had a bible in a black plastic bag.
I just feel like that wasn't enough to give you, he lamented.
I have a lot on my mind right now, you've given plenty, I'm distracted...I told a perfect stranger.
He was tall and had beautiful eyes.
He just looked at me for a second and said: You are blessed.
And, right now, while I stew a bit over the thing I wanted, I realized how blessed I am. 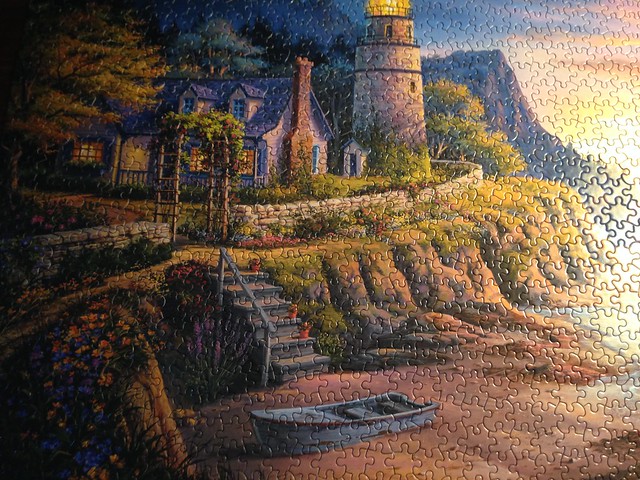 I finished a new puzzle. 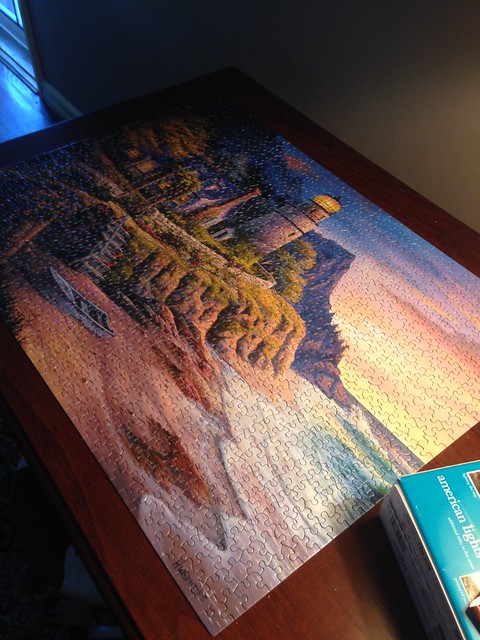 Today, I'll take it apart and re-build The Majestic Lions.

The sunshine is warm, I have laundry to do.
We are looking forward to attending a wedding on May 9th and have booked a return trip to the wonderful house I took K to for his birthday.
All's well in my nest.

Jigsaws. I'm not feeling the love but I am glad that they make you happy. If you have some spare time you could always come and do my ironing.
12:02 PM

Duyvken said…
Acknowledging how blessed we are while still wanting more or being disappointed about that which has not happened is a funny human quirk. I am sorry that the thing didn't work out and I am grateful that you live in Tuvalu where wonderful things happen like being sung to in the street. Happy puzzling.
7:15 PM

Paola said…
Don't feel bad. I ALWAYS want something lately and I NEVER get it.
Hence, I am always sad and bleah.
Yes, I've become a bitter old lady.

Amy A. said…
I hate that you didn't get what you wanted. Hopefully you will see it as a relief because something better took it's place. (Platitudes, blah, blah, blah…) Eat some good chocolate. :) xo
9:23 AM

L.P. said…
I'm so sorry things didn't work out the way you wanted (this time, there's always tomorrow). It's lovely that you got such compassion from a total stranger (and you are able to appreciate it, no small thing).
10:03 PM