the state of the reunion

Today I dropped the ladies off in town where they'll be spending the night.
They have passes to the museum, lunch dates, dinner dates, drinks dates and will undoubtedly do more shopping.
I have dozens of photos but, for the first time in four years, I signed out of my flickr account and now I can't get back in. Hopefully someone at flickr will straighten it out for me sometime soon so you can see the food, the loot, the HILARITY. 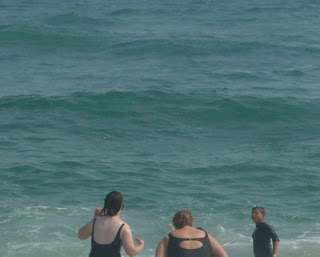 The beach, yesterday, was just beautiful.
We drove a long way to get to the beach I wanted to bring them to but with this crowd there was plenty to discuss on the car ride to keep us entertained.
It was especially enjoyable to sit with my blog pals and shoot the breeze. The breeze, which occasionally pummeled us with sand and salt spray.
As I've mention, as we've teased her about mercilessly, Susie had never even SEEN the ocean. 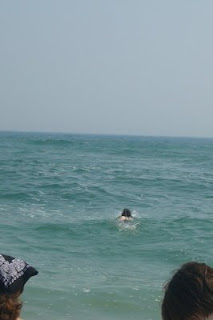 Under those circumstances I had, we had, expected her to approach with some trepidation - and the ocean was rather rough yesterday...but she waded out just a bit and then DOVE RIGHT IN, stunning us with her bravado. I don't know why we were so surprised, she tackled it with the same gusto she employed whilst learning to suck down oysters.
We were all squealing with delight as she was smashed into shore time after time after time.
Jen took some good hits too, and they both had bloody legs to prove it.
(which I'd show you a picture of, but, you know, that whole flickr thing IS MAKING ME CRAZY)

We came home to one of K's memorable meals: pork loin, rosemary potatoes and roasted fennel and carrots and a big salad. Of course we started with a platter of perfect cheeses and sausage. My mom brought cake over and we poured some chilled ice wine and had a remarkable evening.

I can't even begin to describe how funny, joyous, snarky, warm, and interesting these women are - and having the luxury of sitting with them until the wee hours (which, for me, isn't much later than 11 pm) is a gift.
I could go on and on but the upstairs bathroom has nearly as much sand in it as Susie's bathing suit did yesterday and I want to throw a load of towels in the wash.

Thanks for your birthday wishes. I'm looking forward to showing you my presents -
RIGHT AFTER I DEAL WITH THAT FLICKR ISSUE.
Labels: fun in the sun

You set them loose without you as their mentor and tour guide??? Did you strap GPS anklets on them first?

Jan said…
Susie sounds like a fun person to travel with!
And I missed your birthday??! Guess it would be foolish to say *hope it was memorable*.
3:11 PM

Badger said…
Happy birthday! I missed it too, somehow. Will drink an extra glass of pinot in your honor tonight. Or maybe THIS AFTERNOON, depending on how the rest of the day goes.
3:16 PM

MsCellania said…
What a wonderful birthday present - those exceptional ladies!
And your family, of course.
My hat's off to Youngest for the very generous loan of his room.
Have a great weekend. You must be exhausted!
3:22 PM

Stephanie said…
Wait a minute! How did I miss your birthday?! Happy, happy wishes to you.
3:46 PM

Anonymous said…
Your birthday? How DID i miss your birthday? I'd wish you happy one, but it sounds like you chose joyous instead.
4:11 PM

Mary said…
And I will sit here patiently waiting for the Flickr issue to be resolved.
4:40 PM

Anonymous said…
How did I miss your birthday? Sounds like you had quite a fun one! Isn't it great to meet internet friends and feel so at home with them? Would have loved to see you all diving in the water.

KPB said…
That sounds like the best birthday EVER.
9:59 PM

I am a Tornado ~ proven fact! said…
Happy Belated, sorry I missed.

What a wonderful time-good memories this summer!
12:45 AM