notes from the field

My brother has returned from "the field" (that's what he calls it when he's out on a major kayak excursion) and I thought I would take this opportunity to interview him about his experience and post it.
(You don't want to hear about me dusting and vacuuming.)

So.
You're back from "the field" - are your arms tired? Heh. That's a little joke about the kayaking. How long were you gone?
Did you train people before you went out - how does that work?

'the field' is a NOLS term and it comes from how many weeks you have worked, 'weeks in the field' is what your pay is based on. My arms aren't tired, because kayakers shouldn't use their arms. I was gone for just under three weeks, a short course. We have students for one day before we 'go into the field' and there is a lot to do. We go through their personal gear, and talk about group gear, we spend some time getting their food rations, and preparing our re-ration. We talk about what we are going to be doing, to make sure everyone knows what they are in for, they learn how to set up a tent, then the following morning, we go.


Did you make fire with flint or did you use a lighter?

If we make a fire it is a leave no trace fire, ignited with a lighter.

A leave no trace fire is a fire that won't, well, leave a trace. We do fires in the intertidal zone, so at the next high tide the fire will be washed out and no future visitors to the camp site will see remains of the fire. Everything we do in the field is run via the Leave no trace principles.

What, exactly, were you teaching out there?

Our students learn a lot. They learn sea kayaking, and camping, and cooking skills. Some learn fishing. We throw in (depending on what people want) meteorology, geology, currents, tides, navigation, baking, marine mammals, just about anything related to Alaska. But almost all of what we teach can be related to 'the leadership progression' this is a leadership school, and that is what people learn.


Did you have any bad experiences?

Not on this trip.

Do people ever get hurt? (Now we are getting to the good stuff.)

Yes. And as one of the only paramedics I am generally the ranking medical person. So I get all the good ones. On this course I had a woman with very bad sciatic nerve pain, but we managed to control her pain, and she didn't have to leave.

Has anyone ever left the party? Not been able to hack it? Or do you weed those people out before you set off?

Admissions tries to, but frequently people get 'evaced'. By either boat, plane, or helicopter, depending on the seriousness of the issue. If you can't hack it, you get a boat.


Do you bring real food with you or just freeze dried stuff?

Well, we don't bring freeze dried. We bring real food, though a lot of it is powder. Powdered milk, instant mashed potatoes, things like that. We have some 'freshies' like real potato, carrots, garlic, onion, lots of pasta and grains. A LOT of cheese. Generally we bring a little sausage. Tuna. Things like that.


Was there a time you were worried about weather? What do you do if the weather is threatening? Do you carry a special radio?

We carry VHF radios for contacting boats, and emergencies. These radios have weather channels so we can hear the marine forecast every four hours. Weather is a good thing. Students have to learn to watch the weather change as we are paddling, listen to a weather forecast and figure out what it means, and use the forecast in planning for their leadership day, and react accordingly to changes in the weather. We don't worry about weather exactly, but we are careful about wind. High wind will keep us on the beach, instead of in kayaks. But on beach days we teach land classes.


How big is the group? How many instructors go? What about bears?

The group varies, this last group was nine, and all female. Normally it is slightly more male. The group for this course can be as many as twelve. There are usually three instructors. We saw bear scat at a handful of our campsites. The bears in Alaska aren't habituated, meaning they don't associate humans with food, but inland you still need to be careful. Where I was, the bears are docile enough that we don't even do bear bags or things like that. Though we do carry bear spray which is like mace but much bigger.


What do you like best about leaving civilization behind?

I like going out. I like being in that environment. I love paddling, and teaching, and seeing my students take over the expedition. I like seeing people realize they can do so much more than they thought they could.

What do you miss the most when you leave civilization behind?

My wife. I miss her terribly. My boy too. But it's a good incentive to come back in one piece. I love that there are no cell phones, and people are forced to be in their own head.


Do you reach a point where living out there becomes second nature and you have a hard time re-entering the real world?

Living out there is second nature for me, as I have been doing this for a while now. It is hard work. Everything takes more time. For instance, going to the bathroom takes planning, and about 30 minutes. Working that into everything else you have to do can be a challenge, And that goes for just about everything. The hard thing about returning to the real world generally starts at the airport. Too much noise, too much confusion, too many messages, both visual and auditory. It can be overwhelming. 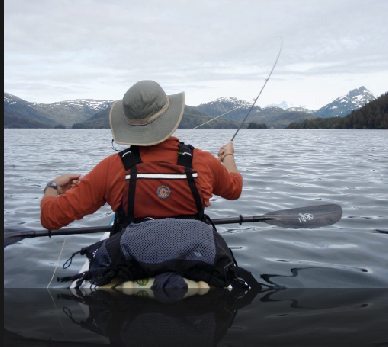 Labels: he makes fire with a damn lighter

Anonymous said…
See? THIS I couldn't do. But I admire your brother, very much. It must be so enriching.
paola
9:05 AM

KPB said…
See, I would love to go and do something like that, but the whole idea of having to poo in a tube and then carrying it around with you just kind of kills it for me.

Badger said…
Tell me again WHY he hasn't tried out for Survivor? A million dollars, dude! You could buy a lot of instant mashed potatoes with that!
10:50 AM

Saoirse said…
that pic looks absolutely amazing!! WHERE is this? Washington State/Pacific Ocean--thinking that's it with the mountains, but could be ALL wrong. Looks wonderful. thanks for the info and long time no post for me! these are trying times with son and all....
11:01 AM

Anonymous said…
some notes from the brother:

This is one of my jobs, not my only, though it could be. I have a wonderful wife who understands that traditional career paths don't work well for me. I teach for NOLS a month to 6 weeks out of the year.

We don't poop in tubes. We poop in holes in the ground, again following LNT principles. no TP.

Dani said…
Very exciting! And very timely as my dh is going kayaking next week for the first time. I'll be staying home thankyouverymuch.

I could have used you last night. A party of 100 people and the sternos wouldn't light. With a LIGHTER! I think we needed flint. ;)
11:34 AM

Little Miss Sunshine State said…
I'm not a hothouse flower, but I can't picture myself doing a trip like that.

Other thoughts: Examining bear poop to determine your safety? Yikes. An all female trip? They are better women than me!

Mrs. G. said…
I don't mess with other people's relatives, but he has Secret Boyfriend written all over him.

Anonymous said…
What Mrs G said!
Great interview. I would love to do one of these trips! The only thing that freaks me out is the no TP rule. Yikes...
4:54 PM

Anonymous said…
What a great post! and Alaska no less!!!!! I'm glad you asked that last question, very interesting answer. I did an Outward-Bound trip with the boys and am still amazed at how inner-city kids can come back as young men, with such confidence.
Kayaking sounds like alot more fun than cross country skiing and snow camping for a week. Does he have to eat alot of fish?
Great picture!
Love YOUR "damn lighter" comment. Had me laughing for quite a while.
5:53 PM

Pretty Things said…
I Looooove kayaking -- my husband has a two-seater so our five-year old can come! But that photo at the bottom -- wish we had some mountains like that to look at as we paddle!
9:11 PM

I kept thinking all through this how much J might enjoy this.
11:48 PM

jenny said…
I was on sensory overload after a week in Maine, in a cabin no less...and that was just coming back to my own house - I can't imagine braving an airport.

Caterina said…
Wouldn't it be nice if we all did this at least once? Maybe the "real world" would be a little bit more quiet :)
1:50 PM

Frankie said…
Wow! That sounds like a very eye opening experience. I usually don't really enjoy camping, but it is nothing like what your brother described. I really liked the idea of being forced to be with yourself, in your own head. I know that at least for myself, life can get so hectic, its hard to force yourself to take time to be quiet and reflect. What an experience! Great picture too! I can almost hear the silence.
3:02 PM

Jennifer said…
I don't know about the kayak thing, but I would love to be out in the wilderness like this for a week or so. Probably not more then that.
8:44 AM